Test your knowledge on football trivia with these 35+ questions

Test out your knowledge with this trivia about soccer! From the history of football to the current day, these 100 football trivia questions covers it all. 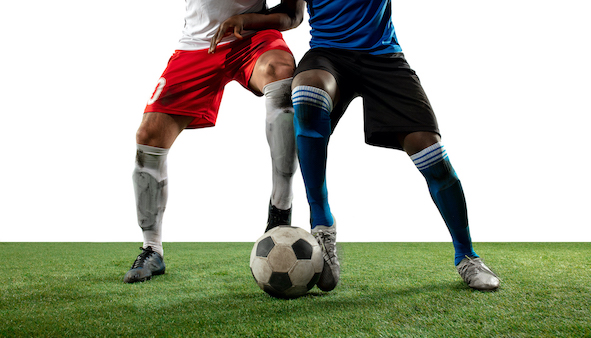 Football is a global sport, with teams from all over the world competing for national and international honours. Across the world, there are thousands of leagues that have embraced the beautiful game. There is a multitude of players that have come together for this sport, but some have left an everlasting legacy.

There are some games that have made enough memories to last a lifetime but do you have what it takes to remember the facts behind the game? Test your trivia knowledge with this one hundred question quiz.

1. When FIFA first introduced their world rankings in 1993, the national football team of which country was ranked at the top?

2. Which English football team has a name that starts with five consonants?

3. If the Queen supported the team who were based closest to Buckingham Palace, which team would this be?

4. In which city is the football team Galatasaray based?

5. "Revealingly" is an anagram of which former England footballer?

6. At the end of the film Escape To Victory, what was the final score in the match between the Allied prisoners of war team and the German team?

8. In 1990, which country's football team became the first ever to fail to score in a World Cup final?

9. In 2006, which German became the first footballer to be sent off in a Champions League final?

10. In 2009, who became the first Asian footballer to play in a Champions League Final?

11. In 1998, which German became the first outfield player to play in five World Cups, after playing in every tournament since 1982?

12. Which two French teams take part in the football match known as the Côte d'Azur derby?

13. In Italian football, which two teams take part in the "Derby della Capitale"?

15. The Monty Python sketch called the Philosophers' Football Match featured a football match between philosophers from which two countries?

16. Manchester United were the first English football team to reach a European Cup Final, but who was the second English team to do this?

17. Maritimo, Boavista and Braga are football clubs based in which country?

18. In the UK, what was originally given to every player taking part in an international football match, leading to the name of this item being commonly used to refer to an international appearance?

19. Which famous actress played Jules Paxton in the film Bend It Like Beckham?

20. What connects the number 10 shirts of Brescia, Napoli and New York Cosmos?

21. In which district of Milan would you find the Stadio Giuseppe Meazza?

22. In April 2011, Mohamed Al Fayed told Fulham fans that they could "go to hell" if they did not appreciate a statue of which famous person that had recently been unveiled at Craven Cottage?

23. What was groundbreaking about the 1994 World Cup matches that were held in the Pontiac Silverdome?

24. The Bill Shankly Kop is the full name of a stand at which football team's stadium?

26. The national football team of Azerbaijan play their home matches at a stadium called the Tofiq Bahramov Stadium. For what particular role is Tofiq Bahramov best remembered in England?

27. In a 1994 match against Russia, which 42-year-old Cameroon player became the oldest ever footballer to score in a World Cup match?

28. What are the plastic horns called that produce loud monotone notes and that first came to worldwide attention when they were played by spectators at the 2010 World Cup in South Africa?

29. Which Englishman was the first footballer to score in an F.A. Cup final, a League Cup final, a UEFA Cup final and a Champions League final?

32. In 2006, Mars Bars were sold with special packaging to support the England football team in the World Cup. Which one word appeared in place of the usual "Mars" as the main word on this packaging?

33. Which famous European football club was founded in 1900 and were named after a hero in Greek mythology who fought in the Trojan War?

34. Which football manager once said, "Some people believe football is a matter of life and death. I'm very disappointed with that attitude. I can assure you it is much, much more important than that"?

35. Who worked as Bobby Robson's interpreter at both Sporting Lisbon and Porto before going on to become one of the most successful managers in the world?

20. They have retired their no 10 shirts. Pele, Maradona and Baggio

23. They were the first World Cup matches to be held indoors

26. He was the linesman who helped award England a controversial goal in the 1966 World Cup final

Did you get it all right? If yes, then you are a proper football fan! This is the perfect way to get ready for the 2022 FIFA World Cup!